Hong Kong has already started the autumn auctions in October, and the Western art with the highest price in Asia has also born this season. With this enthusiasm in the coming days of October, a new round of auction season will begin soon at Mainland China which brings together the classic works of modern and contemporary masters from both East and the West. It will surely bring more excitement and surprises to the market. Now, let's take a look at the selected works of modern and contemporary art.

Su Tong/Chang Jin/Lu Yang/Li Xiaoshan was created in 1994, Mao Yan painted a panoramic work of a group portraits of the contemporary Chinese litterateurs. On the far left of the picture is Su Tong who is the leader "avant-garde" in Chinese literary world. Next to Su Tong is Chang Jin, the director of the Landscape Painting Research Institute of Jiangsu Chinese Painting Academy. The second to the right is Lu Yang the poet who was regarded as one of the avant-garde writers with strongest personal style. Then the art historian, theorist, and critic Li Xiaoshan, is on the far right of the picture. This work is one of Mao Yan's most important creations during his "Portraits of Friends" period. 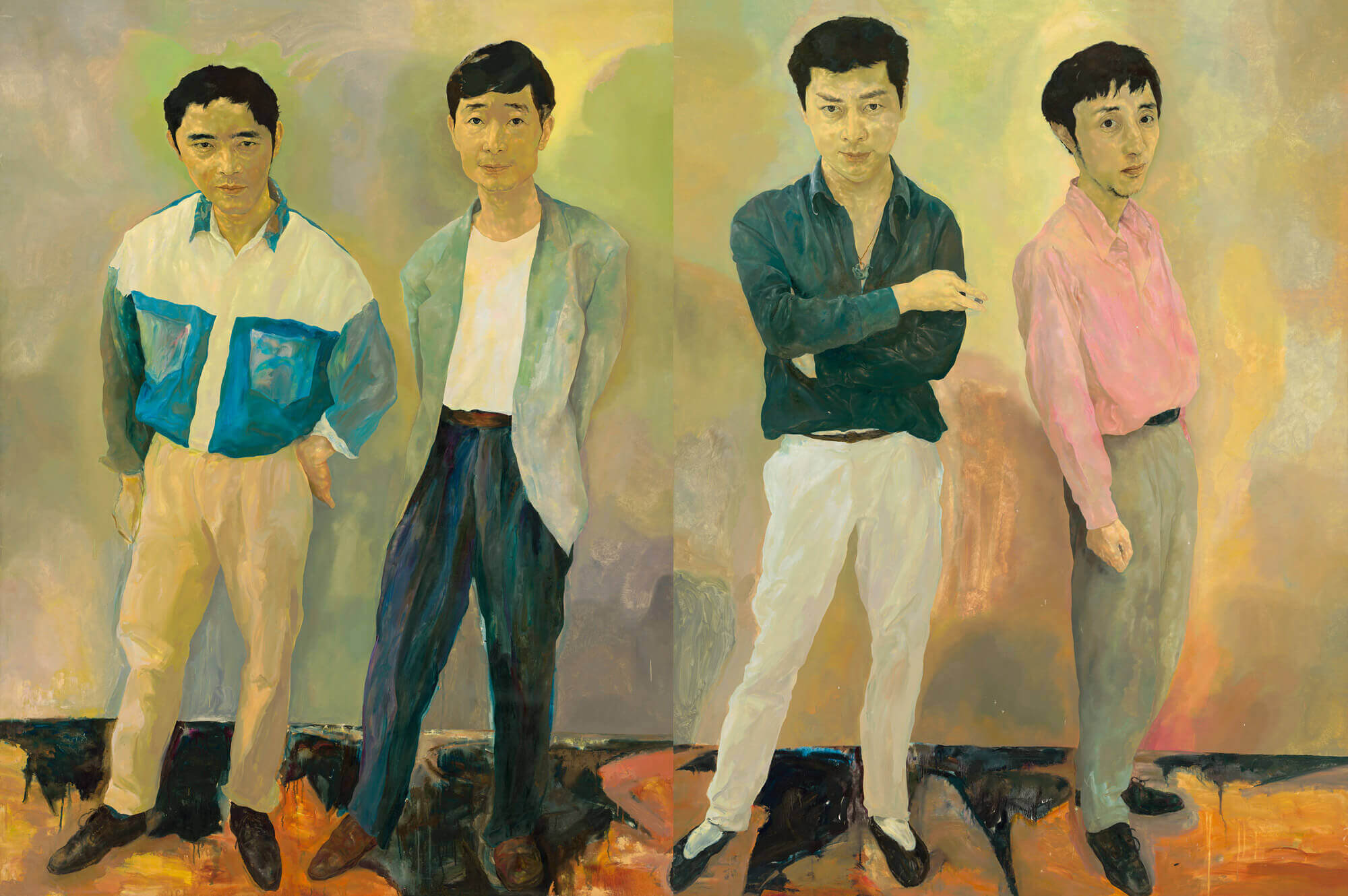 On That Morning of Zhao Bandi

On That Morning was created in 1990 and is one of Zhao Bandi's most representative masterpieces in his "Classical Period". He has participated in many important exhibitions of the new generation at the time. This work is also one of Zhao Bandi's representative works with a "new generation" style. It revealed of him receiving strict academic training and solid skills, as well as the profound connection between the period in which the work was born, and the reality of present time in terms of composition, color, tone, and brush works. 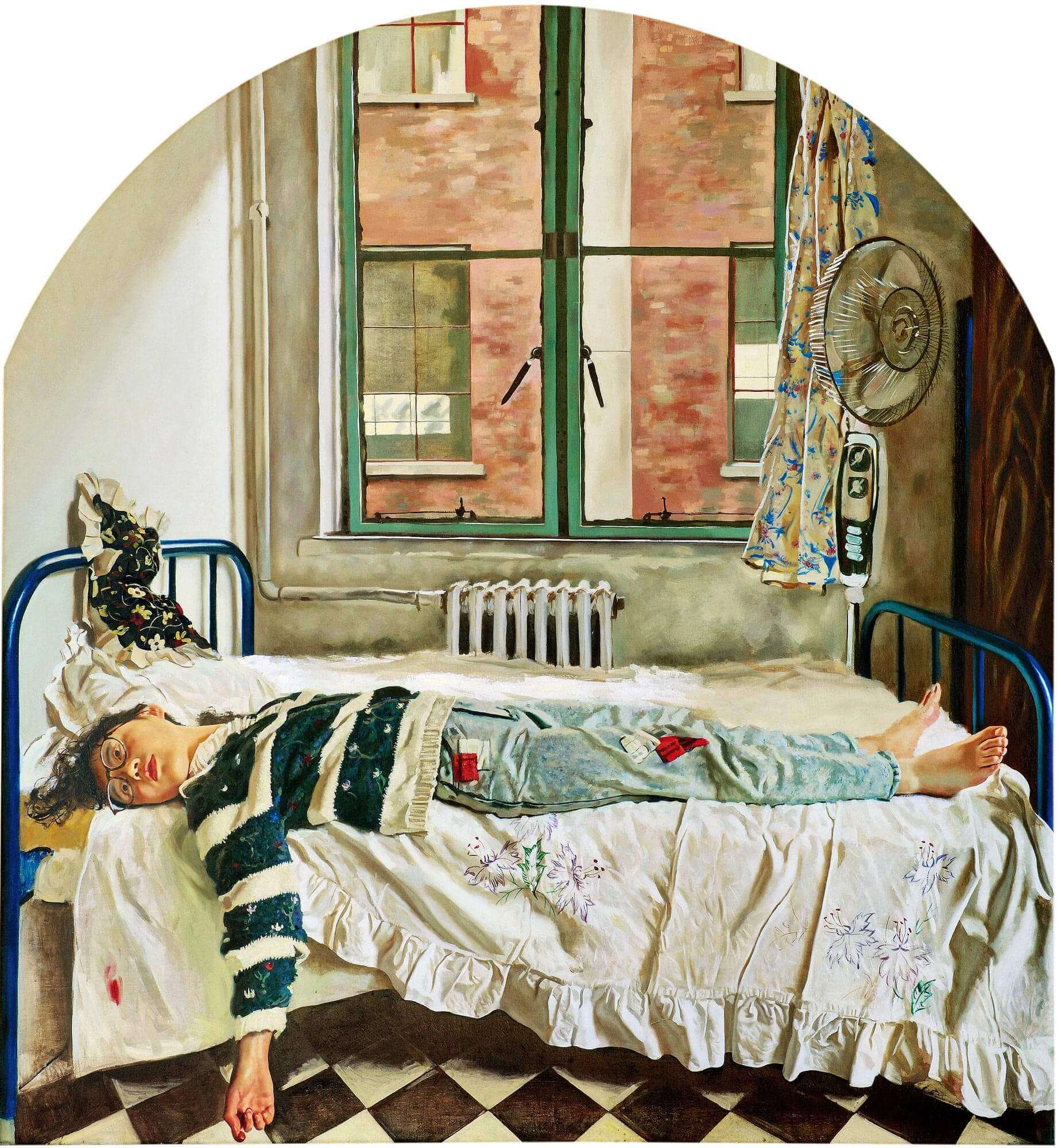 Mask Series No. 6 of Zeng Fanzhi

Mask Series No.6 was created in 1999 which belongs to the classic works of Mask Series. Compared with the earlier "Mask" works, the characters in this painting is standing on the mountain top, generating a "view of the mountains" of a great master. The composition of this painting is more concise, and reduced the excessive brushstrokes, which highlights the detachment and distance of the atmosphere in picture. 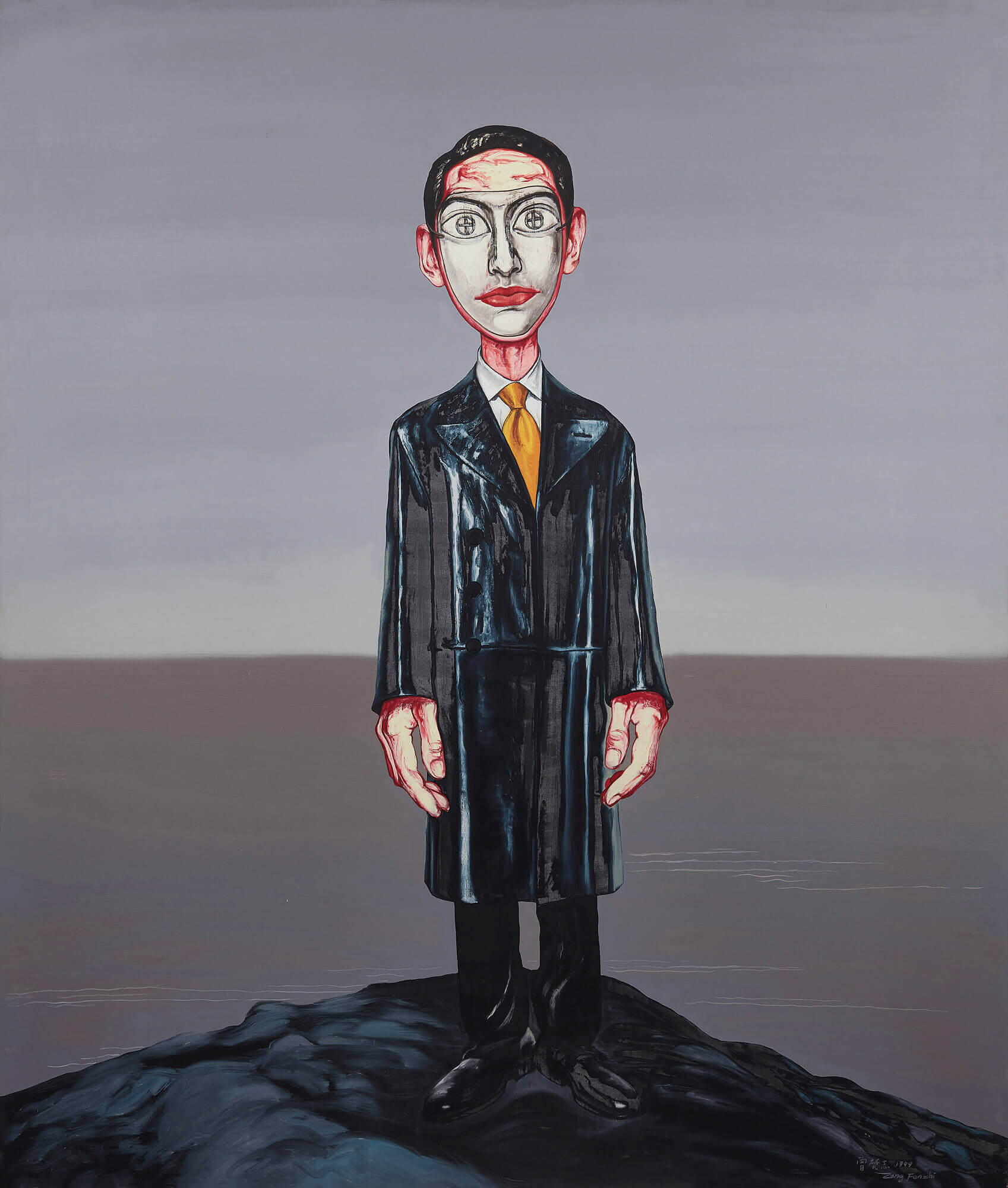 Wang Yancheng's Untitled used a large area of ​​"splashing", "sprinkling", "rushing" and "dripping" to create a sense of surging forward and shock waves on the screen. In the thrilling opening and closing collision, he created a unique and magnificent style. 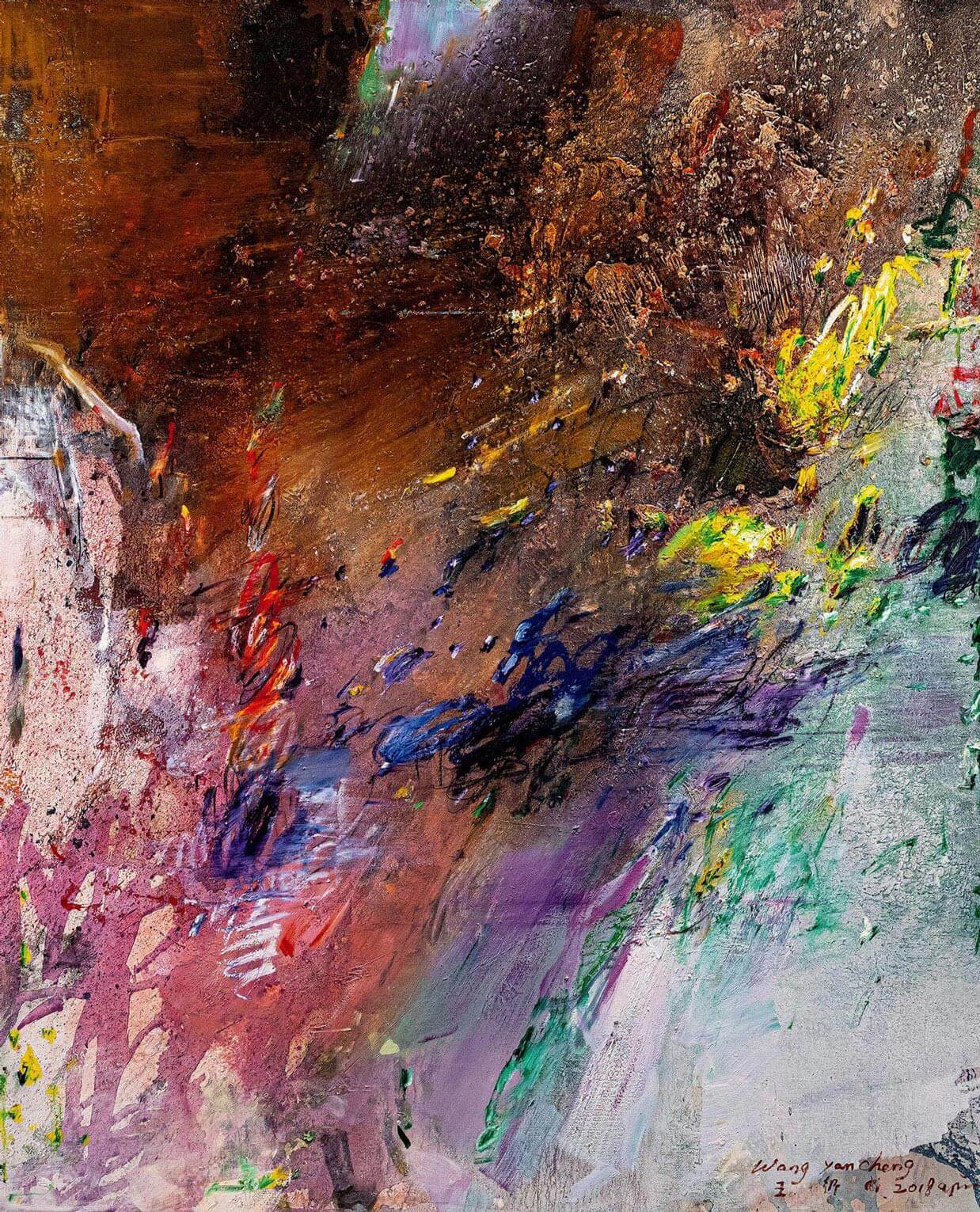 Accords Fondamentaux was completed in 1991, this year was during Chu Teh-Chun’s artistic heyday. The work continued the light exposure that appeared in his paintings after the 1970s, and showed the free stroke and the interweaving of dots and lines in the halo if this wonderful scene. In Accords Fondamentaux, the calming background, vigorous brushstrokes, jumping color blocks, and ink dots are unified together, which fully demonstrates the musical and rhythmic characteristics of Chu Teh-Chun's works. 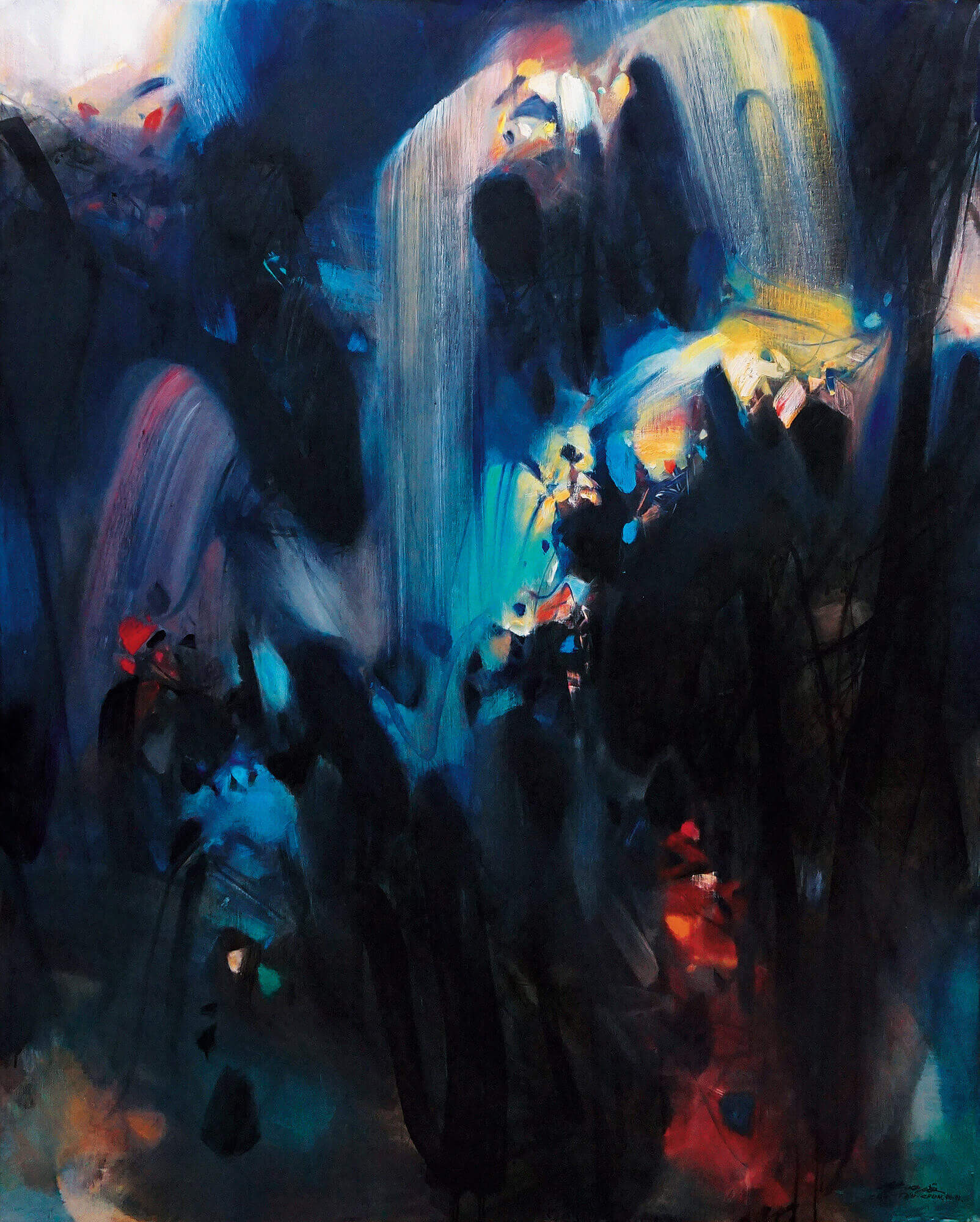 Girl In The Moon of Yoshitomo Nara

Girl In The Moon was created in 2008, Yoshitomo Nara used acrylic to paint a girl with big eyes and stuck out tongue in front of the audience. What Nara wants to convey is this "Innocence" that appealed to us, but also introspective. He hope that the viewer will go back and forth between the present self and their childhood. In this time and space shuttling, it seems that they have temporarily returned to the innocent age, deconstructing the current life state, and also constitutes a true self tracing back the origin of life. 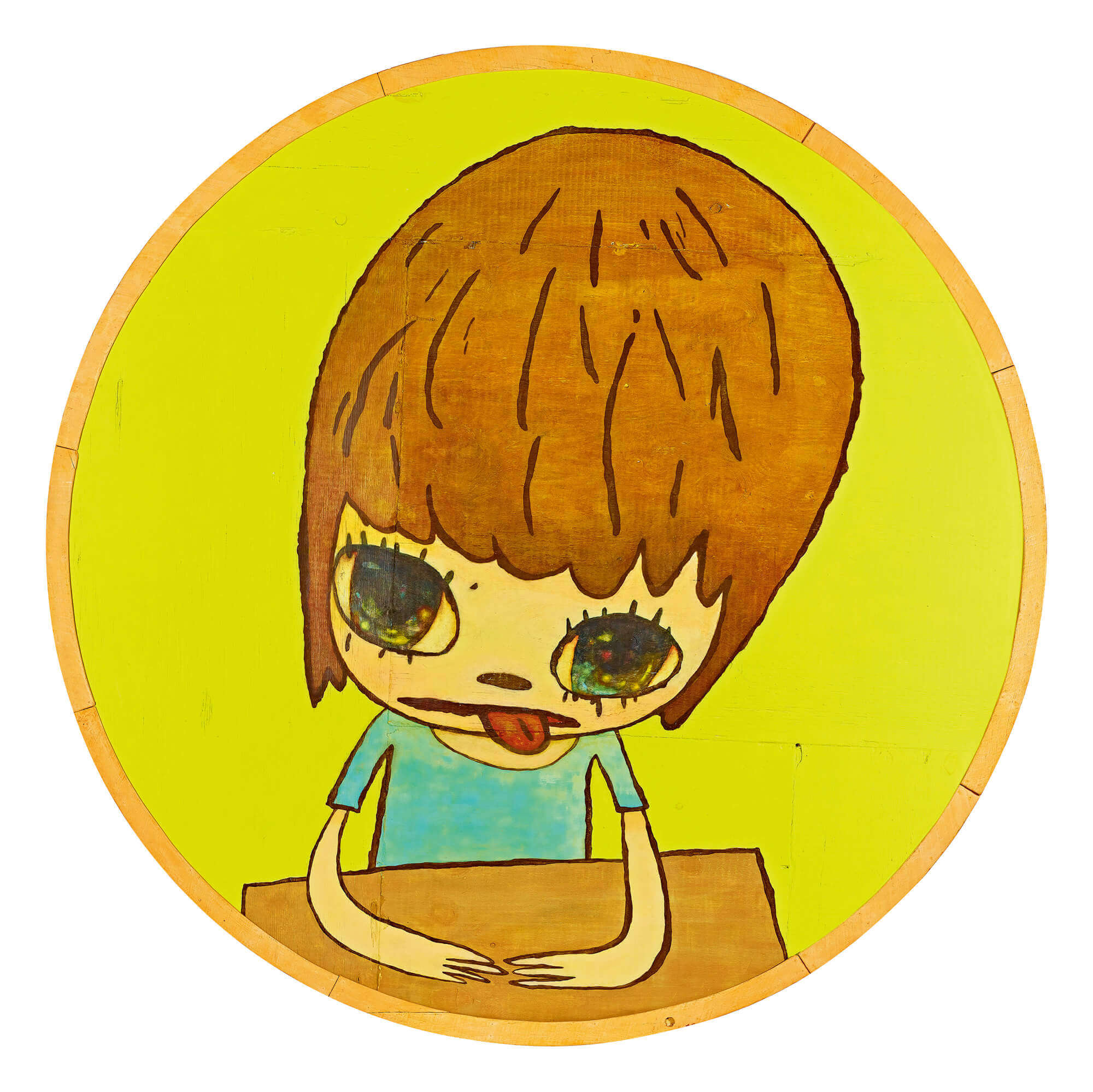 16.12.2001 was created in 2001, is one of Zao Wou-Ki's masterpieces in his later years. At this time, he broke through the original image patterns and has no longer focused on showing fierce intertwined conflicts, but entered into a peaceful spiritual world. On the upper part of the canvas he uses pure monochrome color as a blank area, and the clear sky blue is surrounded and gathered from the bottom up by the highly impactful dark blue. The rigidity and softness were coupled together and a pulsating power of the universe rushes forward. 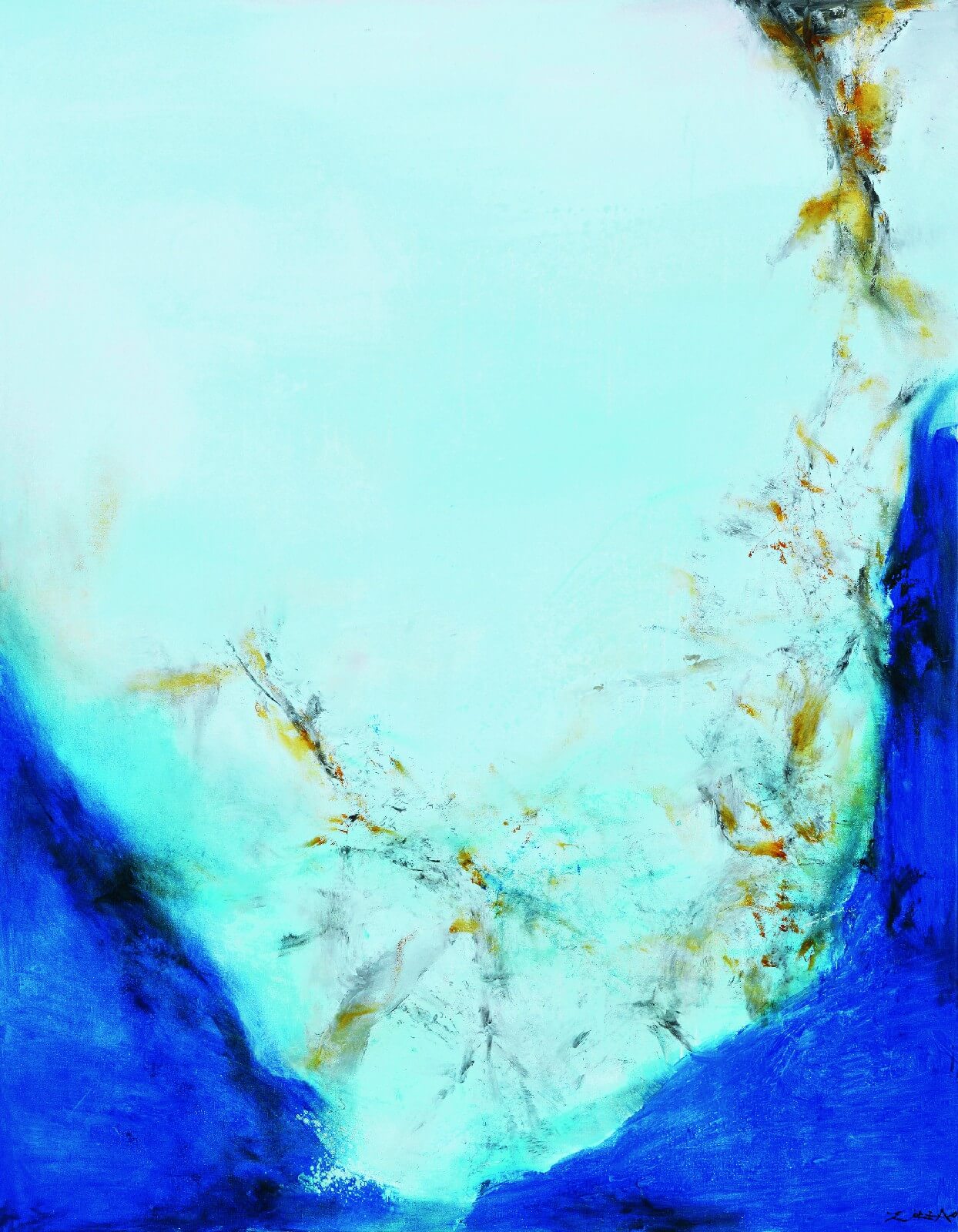 As one of Zhou Chunya's large scaled paintings, Peach Blossoms by Water is named from Du Fu's "Haphazard Inspirations: Quatrains·The Fifth". In the picture, the sky is cleverly expressed with a flowing blank space with the spirit of traditional Chinese ink painting. Peach Blossoms by Water is a masterpiece of the transition from the latter part of "The Return of the Red Man" to the timeless work celebrating life. 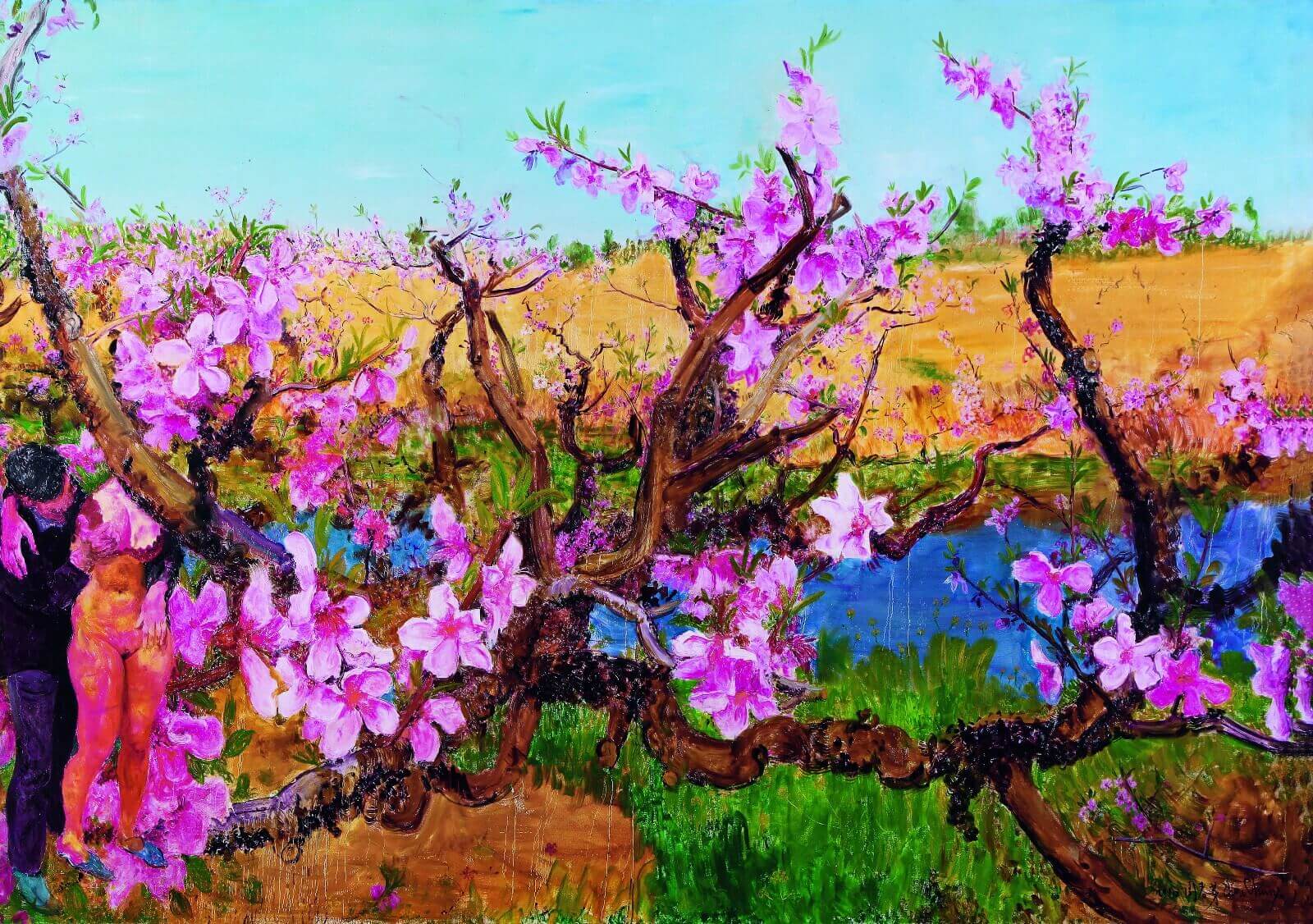 Diamond Dust Shoes was inspired by the Polaroid photos, combined with the classic technique of screen printing by Andy Warhol, embellished with diamond dust materials and innovated this creative technique. The diamonds dusts seemed to condensed on his silk screens, showing the charm and aesthetics of his crazy disco era in the late 1970s and early 1980s. 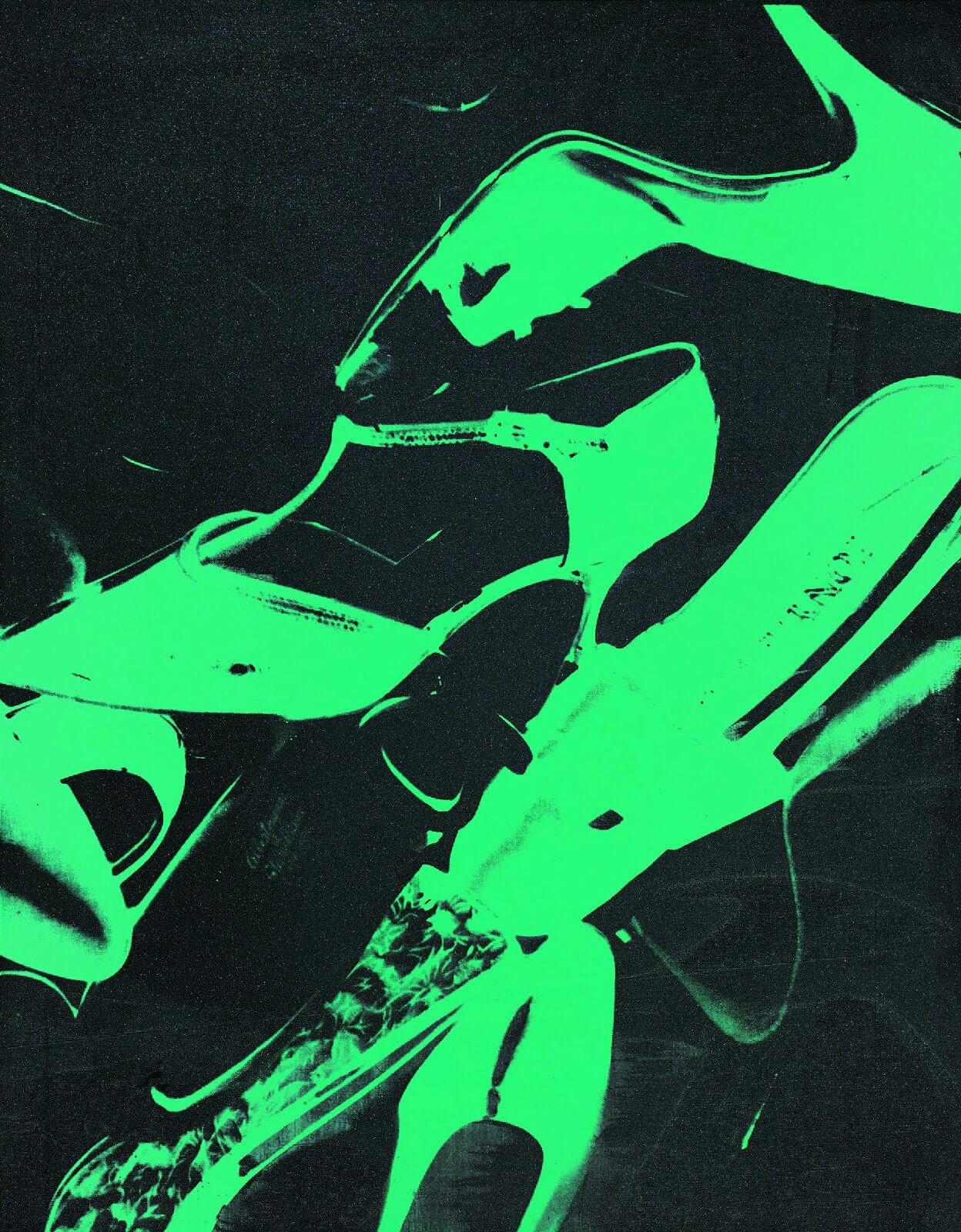 The Woman In Front of The Window of He Duoling

He Duoling's works have various expression techniques and styles, all of which have been carefully adjusted by herself, including the use of realism, impression, symbolism, and representation. Among them, the work has most penetrating power hearts is undoubtedly the series of works based on the famous contemporary female poet Zhai Yongming, including The Woman In Front of The Window. It transforms from a naturalistic style into a background of pure imagination, and turns romantic mood into a rational concept, which is very unique in her creation. 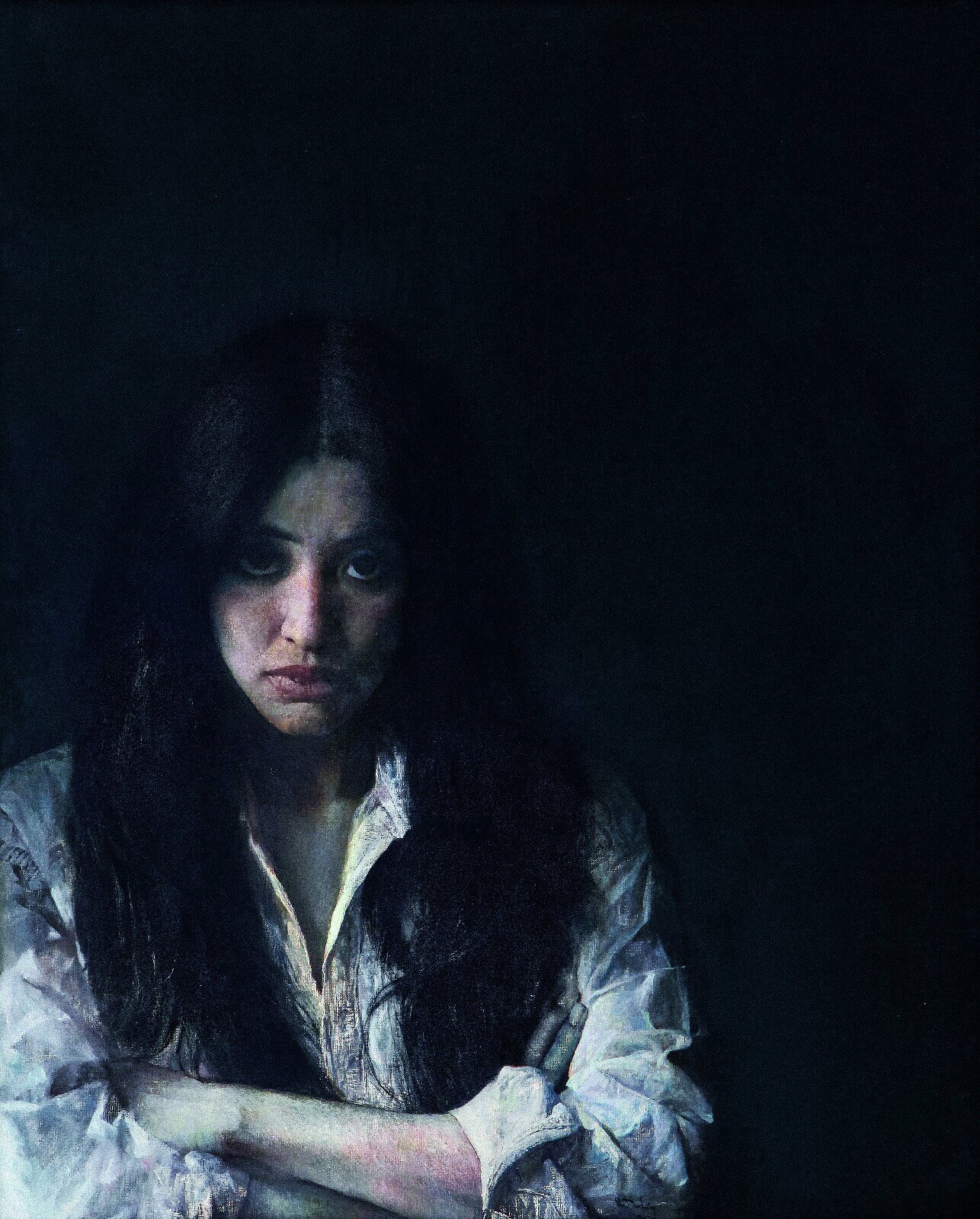 Red Plum Blossoms of Zhang Xiaogang is a transformation after the Bloodline: The big family series and it first appeared at the 2011 Chengdu Biennale. This was a special painting that Zhang Xiaogang created for the Chengdu Biennale. The red plum under Zhang Xiaogang's brush is a depiction of the scorching plum blossom image from his heart. It is quiet but also gorgeous, and appropriately expresses the classics of Chinese culture and the charm of the era.